Chase Greatness: Giving Up Is Not An Option 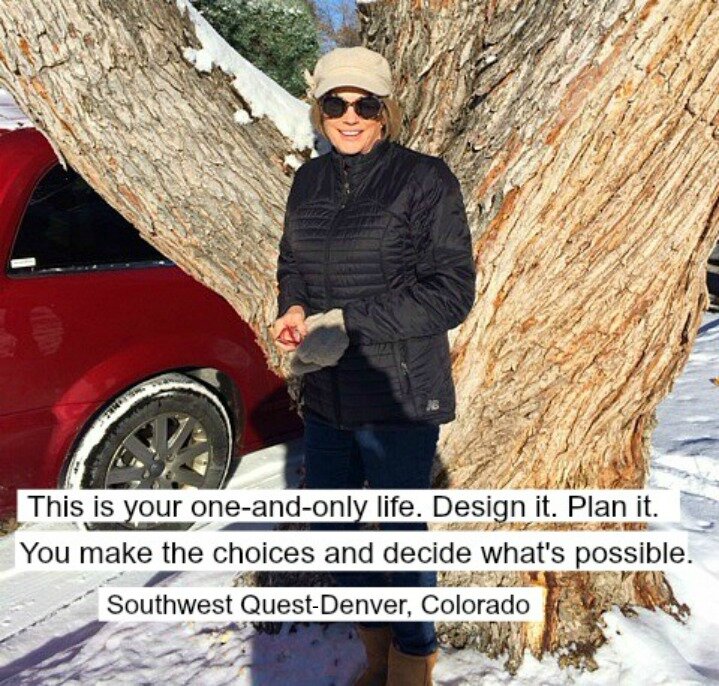 II‘m currently on a quest to fly to every city Southwest Airlines flies into. There are 5 countries, 90 destinations and counting. This month I visited San Jose, CA., Seattle, WA., and Denver, CO.

Life can be challenging and difficult at times for everyone. Things don’t happen as fast as we want them to, relationships end and jobs are lost. And the list goes on.

We are tempted to give up.

When my twin daughters went to kindergarten, I decided to get my bachelor’s degree. I didn’t get good grades in school and deep down I didn’t believe I was smart enough.
I started with two classes: ‘How to Study’ and ‘Speed Reading’.

Then I continued to take a few classes at a time until I finished. It took me nine and a half years!

There were times I wanted to quit and give up. I never did.

In 1883, an engineer, John Roebling, had the idea to build the Brooklyn Bridge. Other experts told him his idea was impossible. It couldn’t be done.
Washington, Roebling’s son, also an engineer, helped his father design the plan and get financing from the bank.

Next, they hired the crew and began to build the bridge that spans the river between Manhattan and Brooklyn. After a few months, an accident occurred on-site.

John was killed and his son was severely injured. Brain damage left him unable to walk or talk. They were the only ones who knew the plan for the bridge.

Because Washington Roebling still had a clear mind, he developed a communication code as he lay in his bed. He could move one finger.

With that finger he tapped out the code on his wife’s arm to communicate to her the plan so the engineers could continue building the bridge.

Washington Roebling tapped his instructions with one finger for 13 years until the Brooklyn Bridge, an engineering miracle, was finally completed!

Several years ago, Hubs and I went to New York for the first time and walked the Brooklyn Bridge. It was a powerful reminder that we can do the impossible.

How willing are you to accomplish your goals? Are you willing to do what it takes?

Would you continue if you knew it would take 13 years?

When you feel like quitting, remember you only have to take one day at a time. Commit to just one more day. Get focused and spend your time tackling the most important things first.

When we are ready to commit to our dreams, nothing can stop us.

When you feel like quitting, read about people who refuse to give up. Learn from them and join them in living life to the fullest.

If we begin where we are and consistently take small steps, we’ll succeed.

I was only 38 when all four of my daughters were in college. By that time, I had my master’s degree in counseling psychology.

After two more years, I began my private practice. Since then I’ve helped thousands of people change their lives, find happiness and success.

Due to the internet, my reach is unlimited. Thousands of people read my blog. I touch people every day through my courage coaching, ecourses and ebooks.

I believe we have a responsibility to ourselves and to each other. We need to do whatever it takes to succeed, to serve and to live a life of meaning.

Put in the time, effort and dedication. Plan on challenging times and struggle along the way. Remember that you are capable and worthy. This is your time!

You have everything you need inside of you. Choose to face what you fear. Imagine the awesome independence, growth and life that you’re creating as you go beyond fear.

Refocus. Put your energy and faith into your dreams. Expect them to come to fruition. Choose to believe that anything is possible. No matter what!

As we come closer to 2015, ask yourself the following questions:

What do I want for myself?

What new experiences would create meaning in my life?

What grand new adventure do I daydream about?

What can I do to get started today?

How can I distance myself from the people, places and things that hinder me?

Give your dreams some serious thought and take massive action. Live without regrets.

Next Post: 5 Awesome Steps to Chase Your Fears and Live Your Dreams