What Was Your Biggest Insight In January 2009? 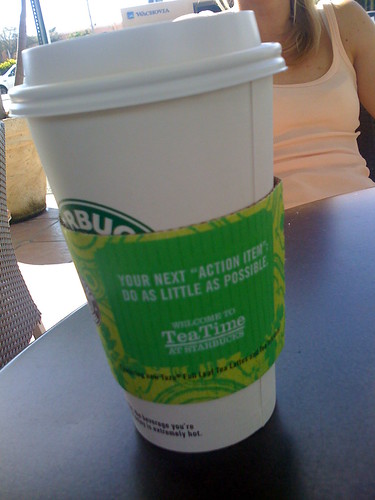 I decided instead of reviewing the year 2009 in December I would review each month. My goal for 2009 was to be smarter with money. I decided to change one bad habit per month.

January’s elimination was coffee…lattes, espressos, mocha…you get the idea. I normally would buy it 4-5 days per week at the nearby coffee shop. My results: I purchased it 6 times.

Now I could say that I failed because I didn’t eliminate it completely. That would give me permission to forget the whole thing and go back to my bad habit completely. Sometimes I wish I didn’t know better! Instead I will look at the 25 days I didn’t buy it. Now that’s progress!

I also made a committment to  my blogging buddy Stacey  about exercising. I committed to lifting weights twice a week the first two months of the year. After that I would increase it to three times a week.

I missed one day. Again did I fail? I think not. Again if I choose to focus on how many times I did what I was suppose to do I look see success vs failure.

We all know change isn’t about perfection. All real change is slow. It’s the main reason people can’t keep weight off when they lose it too quickly.

I’m pleased with my progress as I joyfully move into February’s changes. Here’s your question:

What Was Your Biggest Insight In January 2009?

Please tell me about any insights you had in January on your commitment, resolution or desire to change. If you wrote an article about the New Year and change feel free to leave a link.